The Walking Dead season premiere started off with a whimper rather than a bang and it’s clear that this episode was more of a setup piece for the season. The episode starts off with Dwight, Carol, Maggie and others preparing for the attack on Negan’s complex and that’s pretty much most of the episode until the actual attack. I have to particularly point out Rick and Maggie, who were giving a speech that was so campy that I wish I could fast forward that entire scene. 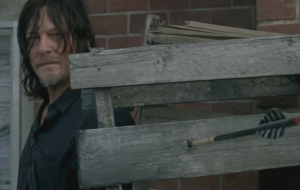 The second part of the episode was dedicated to setting up season eight’s main story focus by introducing several stories lines, one taken from the comics; Old Man Rick and the other touching upon morality as Carl and Rick have a scene together with differing opinions on it. It isn’t something we haven’t already watched in the past, it could be a set up for a possible major event yet to happen.  Now I understand the need to set this up, however it leaves the viewer confused and frustrated in the typical walking dead way,where you don’t receive the answers to this until  seasons later. 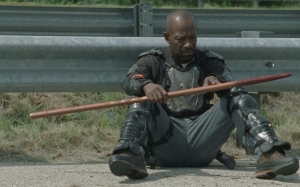 The last part was dedicated to the attack on Negan’s complex and it was okay at best. One would think that after everything that has happened between Rick and Negan, he would be better prepared for an attack at his base of operations. Shots were fired, but It was nothing spectacular , like we have seen in past seasons  5 and 6. 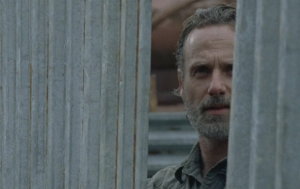 By now most fans should be familiar with the formula that the writers and directors are using and this episode more than anything else emphasizes why I have become so jaded with the series. The dryness of it all……