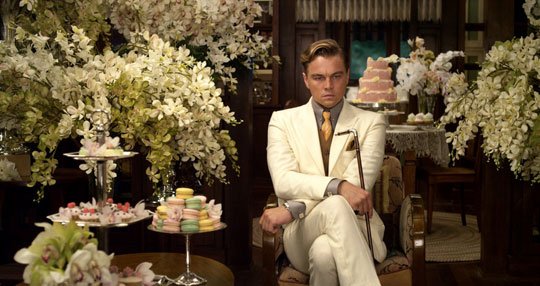 Last week I bought the DVD of the recently released Baz Luhrmann adaptation of F. Scott Fitzgerald’s The Great Gatsby, the film that caused such a stir earlier this year. Regardless of what you may have thought of it, you’ll have to agree that its aesthetics, and particularly the tailoring, made for thought-provoking viewing. In purchasing the DVD and re-watching the film, I’ve had an opportunity to figure out why; to my mind, it’s just not quite right. The concept behind the tailoring is inspired and in the interests of fairness, much of the tailoring in the film is well executed. Catherine Martin the designer responsible for producing the collection collaborated with Brooks Brothers (Fitzgerald’s own outfitters) and the suiting is filled with period features. Trousers feature a suitably high rise, jackets break high with three button and three-two-roll closures on display. A number of jackets are cut in a Norfolk-style, with intricate patterns of back pleats and half belts. The fabrics used in the suiting are similarly inspired choices. Gatsby’s white herringbone and pastel pink linen pinstriped suits are both cut in exquisitely fine linens by Holland & Sherry, and most of the dinner suiting uses Dormeuil cloths. Wolfsheim sports a handsomely cut double-breasted suit in a blue-grey wool and mohair mix which is arguably the finest piece in the film.

Firstly, the attention to detail regarding the fit of a number of the suits is poor – collar stands are frequently too high on Gatsby’s suits and stand proud, spoiling his effortlessly glamorous image. Trousers are cut with turn-ups, which is an historically accurate feature, but the legs are consistently too long – causing the hems to break on the shoes and the legs to bunch around the ankle and shin, spoiling the clean lines that the drape and turn-ups would otherwise provide if they were hung at the proper length just touching the top of the foot. There are some serious issues with cut too – trousers for some unknown reason (most likely in an attempt to emulate the modern fashion) are cut skinny and don’t work with the high-rise on the trousers. I suspect this is one of the features in the costume whereby Martin has tried to ‘modernise’ 1920s tailoring, but the effect is unflattering. If wool had been used it would have worked better, but the film is set in the summer and by being cut close through the leg, the linen cloths used don’t have any space to drape and flow – spoiling the otherwise flattering, floaty lines provided by the use of linen.

The choice of frog-mouth pockets on trousers is also curious. Again, they smack of an attempt to offer a modern approach to 20s tailoring, instead of simply producing something authentic. Frog mouth pockets do make an appearance from the 20s onwards, but they are by no means universally used. Conventional vertically cut or slanting welt trouser pockets remain the status-quo as they are today. Gatsby’s dinner suit waistcoat is cut far too high and presents an angular, unflattering line across the chest, as does the strange high-cut double breasted waistcoat worn by Tom Buchannan, which also sports an oddly shallow wrap. Again, this simply doesn’t work and has no historical basis – its an odd experiment.

There are a couple of shots which reveal machine stitched lapel and cuff buttonholes on Gatsby’s suits. I appreciate that this the tiniest thing which the general viewing public won’t appreciate, but it is indicative of a degree of costume cost-cutting on the part of the film, and it really, really irks me. Jay Gatsby would never, never have worn machine stitched buttonholes – even if they had existed in the 1920s. Furthermore, I may have the answer as to why. Controversial though this may be, to me the difference is evident in the approach of each project, and from the training of the designers in question. As I mentioned above, The Great Gatsby was produced by Academy Award winning costumier Catherine Martin, who’s training and background is not in men’s tailoring, nor in the history of men’s tailoring, or the tailoring of the Jazz Age. Boardwalk’s tailoring is overseen (and created) by the keen eye of prestigious New York tailor Martin Greenfield, who collaborates closely with the programme designer John Dunn and ensures that the suits are made using true bespoke techniques (rather than Brooks Brother’s mass production), that they fit properly, balance, that stylistically they work and that they are grounded in period 1920s tailoring. The effect of this expertise is, I think, far superior.

Allow me to clarify my position here. I do firmly believe that tailoring must include fashion forward elements and like any other aspect of dress, should keep evolving stylistically – but unlike casual wear or high fashion which has a truly experimental element, tailoring is grounded in several hundred years of sartorial principles and experience surrounding the construction and design of tailored garments. Time has tested the foundations of the tailoring world, and it is tailors trained in the art of bespoke tailoring – not fashion or costume designers – that know this and know how to make the complex elements of tailored garments work together harmoniously.

The Great Gatsby’s tailoring possesses elements which work beautifully, and other elements which form the basis of an interesting stylistic experiment. Ultimately however, this produces some flaws and reveals that the tailoring was produced by a fashion-focused rather than tailoring-focused designer. This leads me to the curious question of where the balance should lie in the world of tailoring; fashion focused and progressive, or timelessly elegant? I’d like to hear your thoughts on this, so please do feel free to comment below, as I intend for this question to form the basis of a future column.
(http://www.mensflair.com/author/aleksandar-cvetkovic)

I am always free to be who I am

Fashion these days seems to be very cookie-cutter like…