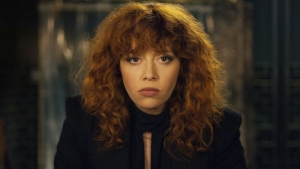 (Before reading any reviews of Russian Doll, I recommend watching it first to help avoid potential spoilers)

The less you know about Russian doll the more enjoyable your viewing experience will be. At least this is how it was for me. Prior to watching, I had never heard or read anything about Netflix’s newest series. . Part of its charm is trying to understand what is going on. Does that mean you will enjoyed it, well more about that latter. The first episode will have you making comparisons to Groundhog Day and that this is just a reimagining of that movie. However, I think Russian dolls is distinct enough on its own to refute those comparisons and would go so far as to say that this series has more in common with Netflix’s other series from last year “Maniac” 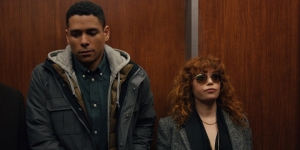 The main premise of the series centers around Nadia Vulvokov, a mid-thirties software developer who is celebrating her birthday when a bizarre incident happens that triggers an event, which throws her into a “loop”. She spends the rest of the series trying to piece together why this is happening to her and what exactly she did that led her to that key moment. What makes things interesting is that every time a new loop occurs a specific detail is missing from the previous “loop”. Along her journey she meets Alan Zaveri, who she learns is also experiencing the same ”loop” alongside her and they quickly discover that they must work together as they both learn how they are linked though this loop. Much of the series starts to focus on experiences from the past that both characters faced, which shape who they are in the present before things became all sorts of strange.

Once you have finished the first couple of episodes you start to notice one of the major problems with the series and that is the pacing. The first half is slow and boring. Which isn’t helped by Natasha Lyonne performance either. Not to say it is bad, I just had a hard time believing that she is a programmer and her character is not very funny. I often found myself wanting to skip her scenes to go back to Charlie Barnett whose character was a far more interesting one. Clearly the standout of the series for me. The final problem I had was the supporting cast or lack thereof. The audience did not get much of a back-story for any of the other characters other than Alan’s girlfriend Beatrice and Dr. Ruth Brenner and what little was presented wasn’t very compelling. 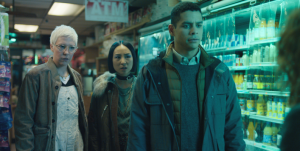 Ultimately, the end payoff was not interesting enough because once everything was revealed; it just ends up being something we have all seen multiple times before not really advancing the genre. Many other reviews have commented on the multiple levels of meaning the series presented but I have to disagree because the only levels I saw were those of unoriginality.

At the end, the loop just ended up being a gimmick to tell the story of Natasha. Without the multiple layers that were present in “Maniac”
6/10