Cuphead is a platformer similar to such classics as Contra, Mega Man and Castlevania. However this is where the comparisons end. Cuphead has a style of its own, this needs to be stated. The developers have clearly created a visual masterpiece that should be experienced by everyone. The music is fantastic and draws its inspiration from the 1930’s Barbershop era as does the visuals. Everything from the colors to the grainy effects, reminds you of this. 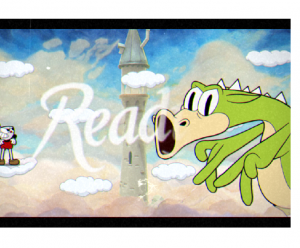 Cuphead is split up between  platforming levels and Boss battles( think of a Boss rush mode you might  find in some games).The game is punishing and extremely difficult. This cannot be emphasized enough. You will die, a lot.But the game was clearly designed in this way. Once you die enough times to figure out the patterns each boss uses, you will eventually defeat them. There are power-ups as well as special abilities that you can swap in and out once you have acquired the correct amount of gold coins to unlock them and unlocks are permanent. The game is short and should take you between 7-10 hours to complete depending on the amount of times you die. 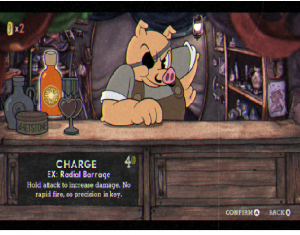 The one major drawback to the game is that far too many times you find yourself being over run with boss attacks that seem to come out of know where, it’s as if the developers wanted you to die at that moment on purpose, making some attacks almost impossible to avoid. Some of the platform levels have jumps designed in a such a way that you might feel that these were tacked on at the last minute an example of this can be seen at one of the level where you  need to flip the world from top to bottom.

Overall, the game is fun to play and the visuals will keep you occupied until you finish the game. I recommend this to everyone