The second season of Netflix new cyberpunkish series starts off at a dive bar at a distant planet where a singer(Jihae) is entertaining the questionable lot. A mysterious women walks up to the bar and ask for Kovacs and the barmen Poe, (the AI from season 1) responds that he is unware of his whereabouts. Immediately another man ask for Kovacs which sets up for the ensuing chaos which is about to take place. This is where we are introduced to this season’s new sleeve Anthony Mackie. 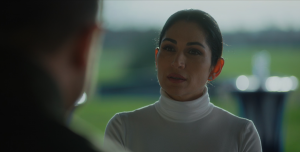 Politics are at the forefront of season 2, as we are introduced to Harland world’s new governor, Danica Harlan and her struggles against a group of Falconer revolutionaries. We also learn that Falconer has been sighted on Harland’s world and this leads to Kovacs pursing any leads that might bring him closer to his long lost love. This season also dwells deeper into the history of Harlands world by explaining the intentions of the original founders.

The set designs are just as wonderful as season 1 and do a remarkable job creating a believable world akin to blade runner. Fans of season 1 will also feel a sense of familiarity when certain characters return as well as previously visited locales.

My issue with last season seem to be a recurring theme as several of those appear again this season such as poor writing and story. Several scenarios just don’t make sense to me such as episode 3 in which a gladiator style tournament is set to take place and certain characters go in one after the other, Why wouldn’t they all go in at once to eliminate the perceived threat? Some of the poor acting that jumped out at me, also involved one of the main characters as she states “the boy inside the man” the delivery of this line just felt forced and unnatural. Anthony Mackie also spends most of this season angry; at times it makes sense at others it doesn’t.

I’m not inclined to say that I will continue Kovacs story, for me it ends this season

Getting Dressed from the Inside-Out: Fashion, Body-Image, and Self-Worth
Scroll to top